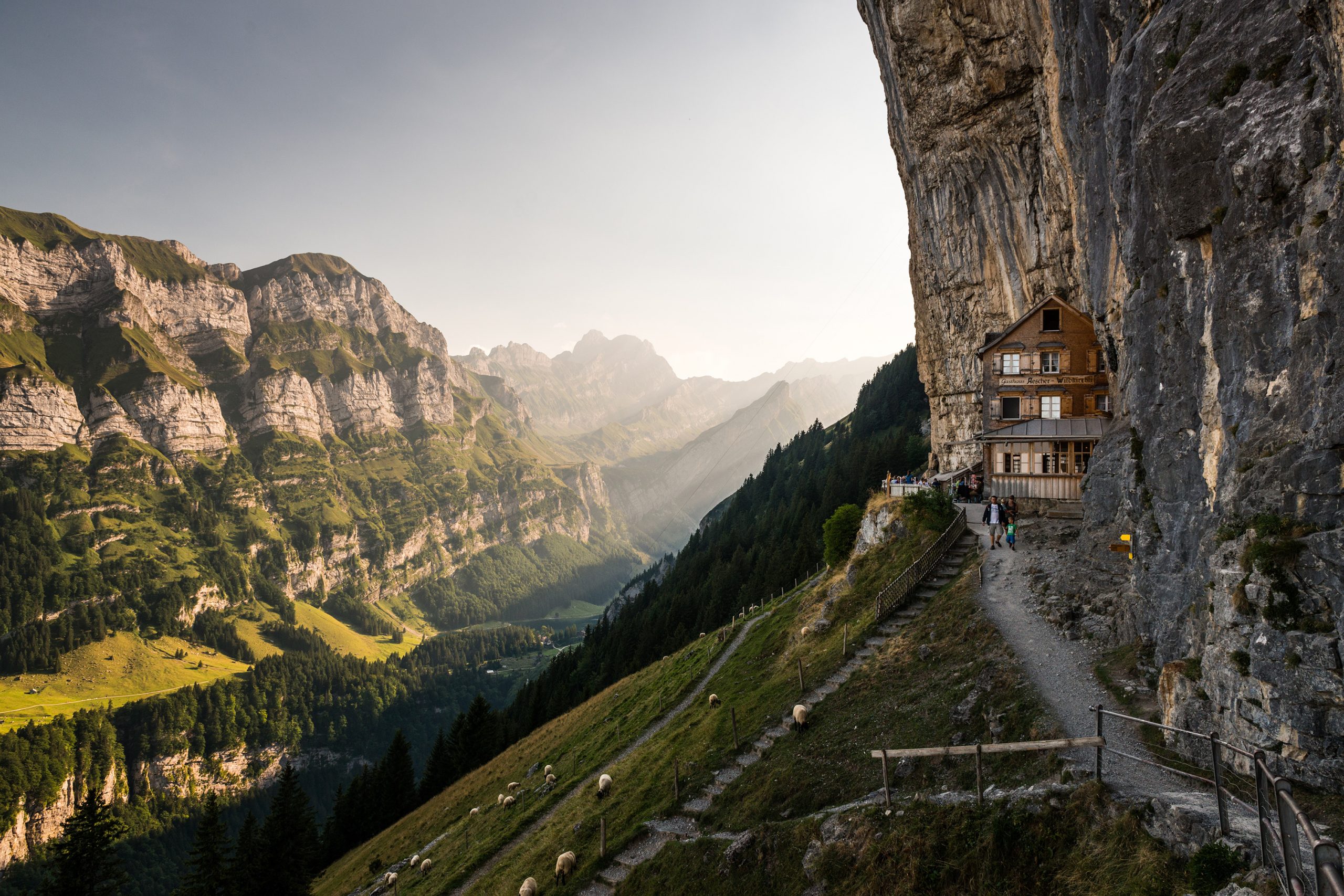 Perched on a cliff overlooking a 100m drop to the valley and the Seealpsee lake below, the Berggasthaus Aescher-Wildkirchli – the Aescher mountain restaurant and guesthouse – welcomes travellers hiking up from nearby Wasserauen in the Appenzell Alps in search of the sublime, the beautiful, and human remains.

Named a Destination of a Lifetime by National Geographic, and one of the most beautiful places in the world, the restaurant is located a stone’s throw from the 1640m peak of Ebenalp mountain and the prehistoric Wildkirchli caves.

These caves tell a tale going back 100,000 years. Bears were the first in a long line of growling, mountain recluses, but they were eventually displaced by Neanderthals (whatever their faults, Neaderthals knew prime real estate when they found it) who hunted chamois and ibexes and littered the caves with the bones. Thankfully we Swiss keep our mountains much tidier now!

It was sometime before the dawn of the last millennia that Ekkehard, a medieval monk and hero of Joseph Victor von Scheffel’s 19th century historical Swiss romance, Ekkehard: A tale of the tenth century, made the pilgrimage up to become a hermit and lick his wounds (there was a rich duchess; it got ugly; he barely escaped with his life).

But it was only in 1851, when the last hermit died and the Wildkirchli hermitage was left vacant, that the idea was born of a guesthouse and mountain restaurant to cater to the steady stream of adventurers, scientists and cave tourists.

Built in wood, clinging to the cliffs, hunkered down against the rocks, the structure might sound the perfect description of a makeshift military fort – it’s anything but. Like much in the Swiss Alps, when you scratch the surface of the imposing peaks and grumbling guardians you find kindness, generosity and hospitality waiting just beneath.

Today, with the Berggasthaus Aescher-Wildkirchli now world famous thanks to National Geographic (the guesthouse made the cover of their 2015 Destinations book), over 200,000 hikers, daytrippers and excursionists visit the area each year. Some come for the invigorating 900m ascent (though there’s also a cable car), some to try the restaurant’s famous potato rösti and some to inhale a healthy dose of Swiss national pride with the fresh mountain air. (Though many, of course, are perfectly satisfied with a stunning bucket-list selfie for their Instagram feed.)

If you can’t make it, but you’re still chasing a bit of the transfiguration the monk Ekkehard promised to any person who ascended the mountain heights with the right spirit, just find your way to your nearest lowland pub (preferably with a cozy fireplace) and order a delightfully bitter Appenzeller Alpenbitter digestif  – you’ll find the Berggasthaus Aescher-Wildkirchli featured prominently on the label (though it’s perhaps not the “right spirit” the monk Ekkehard had in mind).

Whether you like your Swissness in a mountain lodge clinging to the rocks or as a few drops at the bottom of the glass, we Swiss have figured out a way to make it work.

For Cloud Pens, your discretely printed QR Code is

Just how can Cloud Pens help you connect and engag

Cloud Pens enable you to finally track your haptic

With Cloud Pens, the style of the QR Code can be c

Customize any detail of your landing page with Clo