The chair isn’t so much the problem as the sitting 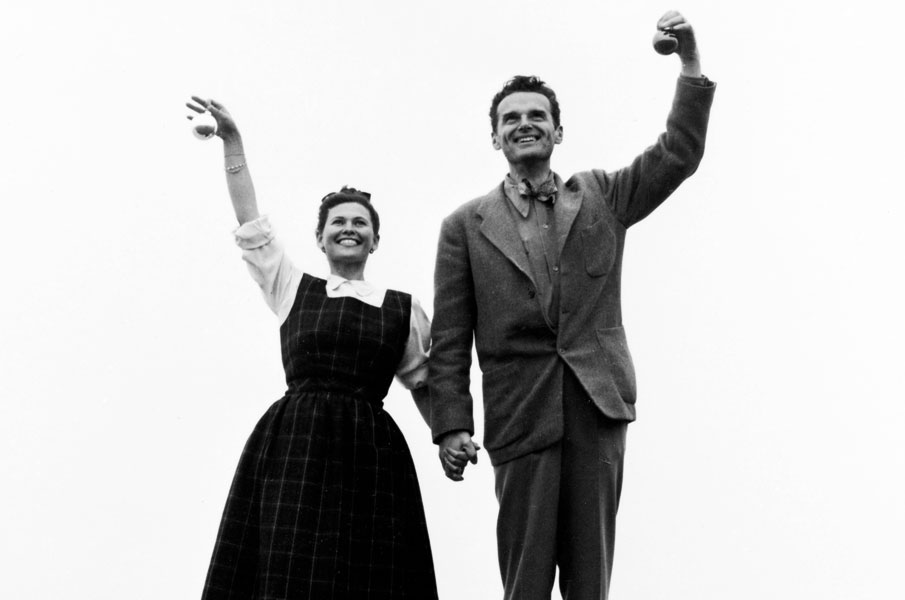 Our story begins with a love letter in 1941. An aspiring architect wrote to a painter who he had met for the first time not long previous at the Cranbrook Academy of Art in Michigan: “I am 34 (almost) years old, single (again) and broke – I love you very much and would like to marry you very very soon”. The young man is Charles Eames and the painter is Ray Kaiser. A few months later, the couple was promptly married and together they headed for California.

While Charles built film sets for MGM in Hollywood, Ray designed the covers for the popular Arts & Architecture magazine. But what the Eames did in their flat was much more interesting. In the guest room, they had set up a machine which they used to continue experiments from Charles’ time at university – “baking” warped and deformed plywood objects. A military doctor saw these organically shaped wooden objects by chance and mentioned a problem they were having in the army: The steel leg splints they had for the wounded soldiers on the front lines of the Second World War in Asia and Europe had proved unsuitable, too rigid and heavy for task. So Charles founded a company making leg splints. Bent, fexible plywood proved its suitability for mass production for the first time – and more than 150,000 splints were sold to the military, representing the Eames’ first commercial success.

When the war was finally over, the returning troops badly needed new flats and furniture for their families. The Eames’ set about designing them and already notched up some great successes with their first chairs in 1945. They created iconic shapes which still influence how we think about furniture to this day. Their guiding principle was simple: “We want to make the best for the most for the least.” In other words, good quality should be affordable for everyone. Their furniture is stylish and, above all, functional: “What works good is better than what looks good because what works good lasts,” said Ray.

In 1947, they founded their own studio, the Eames Office, in Venice, LA. “We see ourselves as craftspeople,” explained Charles. The Eames Office was more akin to a research lab than a design studio. The names of their design classics – such as “DCW” (Dining Chair Wood) and “LCW” (Lounge Chair Wood) – though wordy are still used today and the designs exude effortless and light-heartedness, symbols of optimism and a better future. The famous Side Chair from 1950, initially produced using fiber-glass-reinforced polyester resin and later using polypropylene, was soon populating restaurants, schools, universities, offices and airports across the country; their producer Herman Miller was catapulted to global renown on the back of its success, as was Vitra a decade later.

The designs of the Eames chairs which appear so light are actually the result of endless testing processes. Though Charles is a self-confessed fan of playful imagination – his motto is “I take my pleasure seriously” – he approaches his furniture range like a clear-headed researcher, applying technology and materials and examining their use systematically. Plywood was followed by plastic (1950), then steel wire (1951) and later aluminum (1958). Their chairs always consisted of seating shells with imaginative legs, a formula which enabled the most possible variations from just a few types of chair.

At the same time, the Eames universe increasingly became the visual representation of a Californian lifestyle. The main venues in this universe were their home and their studio, both located on the Pacific coast, only a few miles apart. Their house was built as part of an ambitious “Case Study” program for future living – a masterpiece reminiscent of a Mondrian painting, a minimalist yet fascinating box of steel beams, glass and wall panels. Sheltered by eucalyptus trees, this angular home housed the aesthetically-pleasing and eye-catching items Ray had amassed over the years: kilims, mobiles, African art and paintings by Hans Hoffman, her German teacher, which she hung parallel to the ceiling.

The second main location in the Eames’ world was their studio – a former large garage in the Los Angeles artists’ quarter Venice. In the late 1950’s, it gradually developed into a hotbed for film and creative work. Instead of furniture, the Eames were increasingly putting out films, slide shows and teaching programmes, all beautifully poetic and sensuous in their nature. The duo also proved themselves as multimedia pioneers and adept PR service providers. IBM became their biggest client, and the Federal Government even came calling – ordering museum-like shows and expo pavilions from them. It is this propaganda-like work portraying a good and beautiful America that started to irritate some Eames’ fans from the 1970’s on. Yet never again – at least not until Apple and Chief Designer Jonathan Ive came along – would American product design be so progressive and admired the world over.

A happy ending then – in work as well as in Charles and Ray’s relationship, despite Charles’ affairs. The only negative point was that Ray always remained in Charles’ shadow, and that far beyond the Mad Men era of the 1950’s when the most capable of women could only work as secretaries. Even as late as 1977, when Ray and Charles Eames presented their impressive short film Powers of Ten to the world – a fast-paced journey from a meadow in Chicago out into the universe and back – the New York Times exuberantly praised this original “work by the Eames Brothers”. By this point, the Eames had already been working successfully together for more than 35 years. But Ray was often only perceived as Charles’ companion in public – sometimes akin to a little brother.

Charles himself said: “Everything I can do, Ray can do better.” One thing is for sure: Neither of them could have created this incredible body of work without the other. No matter how they did it exactly, the abstract painter and ambitious architect were exactly what they wanted to be: the dream designer duo of the 20th century. The most successful Eames design turned out to be Charles and Ray Eames themselves, a perfect combination – even beyond their time on Earth. Charles died on August 21, 1978. Ray followed ten years later. To the day.