Spring cleaning for the sheep 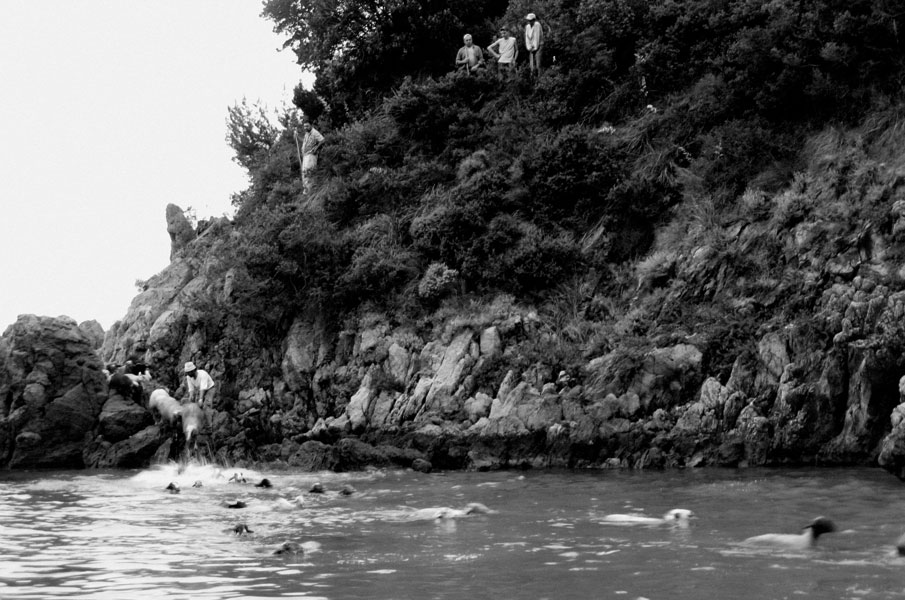 It’s just before dawn when the men roll out from under their covers and start groping around in the semi-darkness of the beach for their sticks. For these shepherds from San Giovanni a Piro, a town at the extreme end of Campania, in Italy, this is the day of the sheep shearing, and it begins with a dip in the sea. For the sheep.

Like every year, the evening before they’d herded the sheep the four hours down from the mountain village to the sea at the Cala degli Infreschi, a small but pristine bay inaccessible by car, where they’d slept over night. August brings its share of vacationers in boats to the pebble beach, but on this early May morning, in the shadow of the cliffs, the bay is silent except for the sea lapping at the stones, the occasional bark of a white Maremma sheepdog, and the bleating of the sheep and goats.

The shearing will take place back up at the village, but the first part of this annual ritual is cleaning the animals in the sea. Of course, the sea isn’t a sheep’s natural habitat, so it does take some coaxing to get them in. Which is where the Wolf comes in.

A Wolf among sheep

The Wolf – il Lupo – is the nickname of Saverio, the undisputed leader of this pack. He’s been farming and tending animals all his life, like his father and his father’s father before him. And now his grown son, and son-in-law, and that man’s brother are all with him on the beach. But there’s truth to that nickname: with a thick mustache and weathered face, he can be rough, solitary, clever and he has been known to howl. In what seems a reversal of the natural order of things, it’s into the Wolf ’s hands that the sheep are trusted.

With sharp, barking commands echoed by the suddenly excited dogs, he herds the sheep along a narrow track to the base of a rocky spit of land that juts into the sea. With the younger shepherds watching from the track above, the Wolf sinks his rough hands into the lead sheep’s wool, grabs hold of its flesh, and hurls it into the sea.

The animal flops heavily into the water, resurfaces again, and with head bobbing and ears skimming the surface, swims the 50 meters back to the beach. The rest of the skittering sheep live up to their reputation: following their leader, they scramble over the rocks and leap into the sea, one after another after another.

Later, back up at the village, the sheep are herded straight into their enclosure in the shade of an enormous oak tree. Huddled at one end, the sheep eye the men warily as they stretch a worn tarp across the grass and begin laying out their tools: manual shears, which are less like scissors than two chef ’s knives joined by a steel loop, cans of antibiotic disinfectant and lengths of cord to bind the animals’ hooves. The sheepdogs take up positions around the flock, and then lay down, stretch out and keep only an idle eye on a situation under control. Then the shearing begins.

It’s a messy job. Many sheep are docile, but some strain at the cords, and the men have the doubly difficult duty of holding the fidgeting animal in place while working the shears so as not to cut into the skin. When a sheep is cut, particularly by a less confident younger shepherd, a small bloodless pink wound opens in the loose skin like an eyelid. The treatment is a blast of the disinfectant spray in electric blue, or traffic light green, or crimson, which protects the shorn beasts but leaves them looking comical, punk veterans of their seasonal grooming.

For the more experienced shepherds, however, the shearing seems an act of co-operation between man and beast. The Wolf ’s brother-in-law – built like a tank, square head, thick neck, broad hands like a pair of wooden vices –barely needs to holds a sheep once it’s bound and on its flank. Instead, as his right hand envelopes the shears and snips deftly at the wool, the other gently rolls back the thick, unbroken carpet as it’s cut away. When the shearing is finished, the sheep, looking naked and embarrassed, bury their noses in the shade of each other’s flanks.

Joking, happy, and swaggering with pride at a job well done, the men sit down at the feast prepared by the women – the wives, mothers and daughters who’d paused occasionally in their preparations to watch the men at work. Roast pork, crepes, fresh cheese and wine are savoured in abundance.

Meanwhile, the pile of wool – about the size of a Fiat Panda – sits awaiting its fate. Tragically, there’s no market for it. The quantity is too small, their methods too primitive, the market too expensive, the village itself too far from any possible centre of wool production. The shepherds of San Giovanni a Piro haven’t sold their wool in living memory. But they keep the ritual, and continue to throw themselves into the tradition of the spring clean, washing the sheep in the sea, one year after another after another.