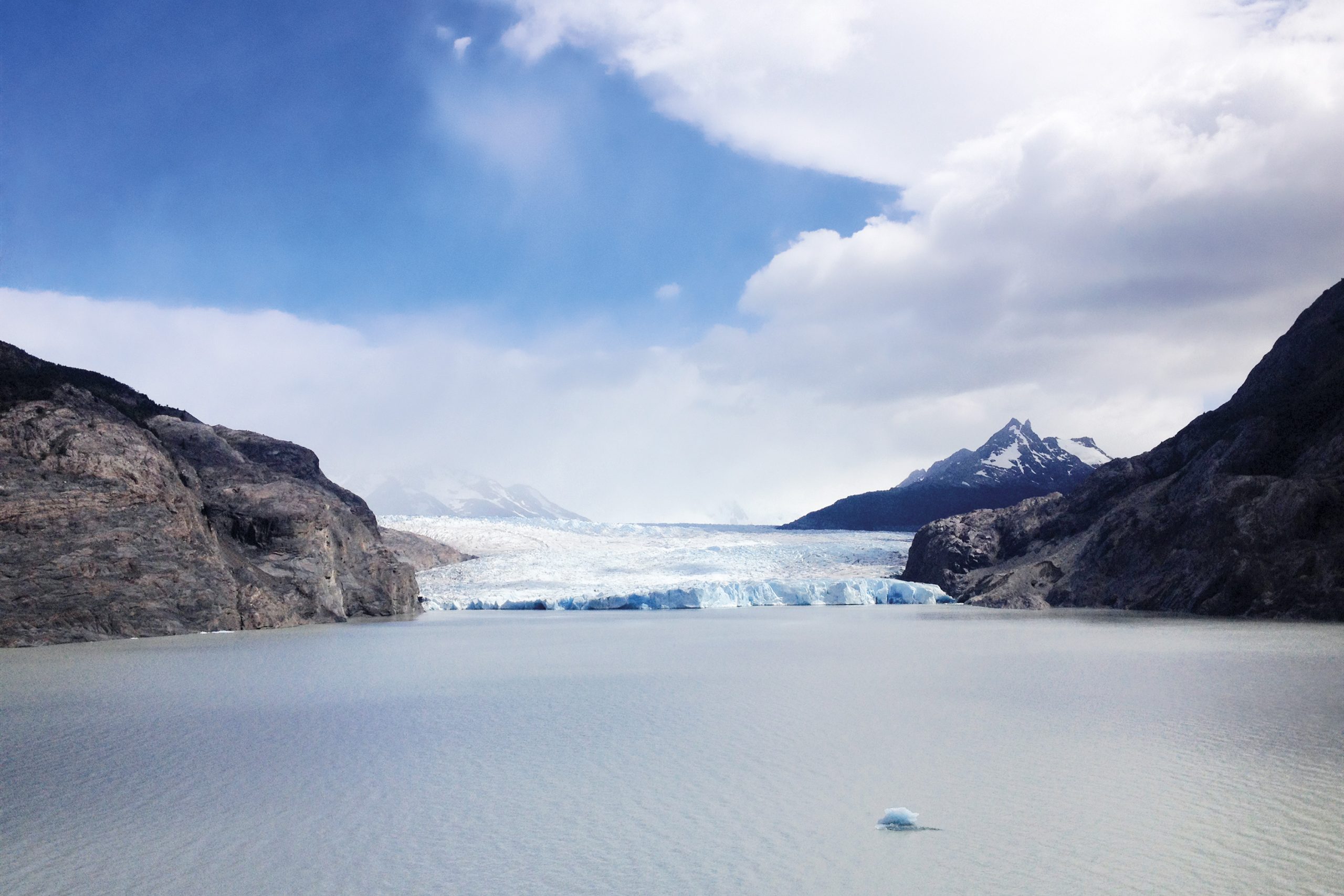 Don’t buy this jacket! You’ve already got one

Patagonia is a promise. The name alone conjures up images of wild natural landscapes at the end of the earth like no other. In keeping with this name and the promises it entails, it should come as little surprise that the company Patagonia does things slightly differently to everyone else. This is the story of an attempt to stay true to one’s self.

Hardly any other markets are quite as reliant on the imagery of unspoilt natural surroundings, undiscovered paths, adventure and freedom as the outdoor goods sector with its promises of breaking away from the conventions and excesses of civilisation. In this other world, you have to be true to yourself and others. If you want to survive, you are on your own and have to make do with the bare necessities because everything else is just extra load that only beginners carry around.

The story of the outdoor specialist Patagonia is punctuated by repeated courageous attempts to cross into new frontiers – as if the company itself were an expedition to the region that gives the firm its name. And on expeditions you can obviously lose your way from time to time, as that’s part and parcel of the fun, and you then have to return to base camp and regroup. The founder of Patagonia, Yvon Chouinard, never wanted to do much more than climb, dive and surf. Sometimes he needed items for his hobbies that he couldn’t find anywhere, so he went about making them – first for himself, then for others. He could quite easily have come up with the saying everyone said that it wasn’t possible until someone came along, who didn’t know, and simply did it. He maintains the myth that he fits in better in the wilderness than in the executive floor of his company, and wrote a book explaining as much. It has since become essential reading for business studies students in the USA. Managing By Absence is what Chouinard calls the MBA which qualified him for his role. A business model has evolved out of the images and values which are synonymous with the name Patagonia – and its success is based on radical coherence: avoiding well-trodden paths, as that’s where everyone else is. And while this approach ensures a peaceful, natural experience in the wilderness, it guarantees exactly the opposite in everyday business, garnering maximum attention from all sides.

In 2011, Patagonia published a full-page advert in the New York Times, proclaiming “Don’t buy this jacket!”. It was a daring call to (in)action on Black Friday, the annual climax of consumption at the end of November on the American retail market. Yet this bold ad represents a consistent step within the adventurous logic of Patagonia. 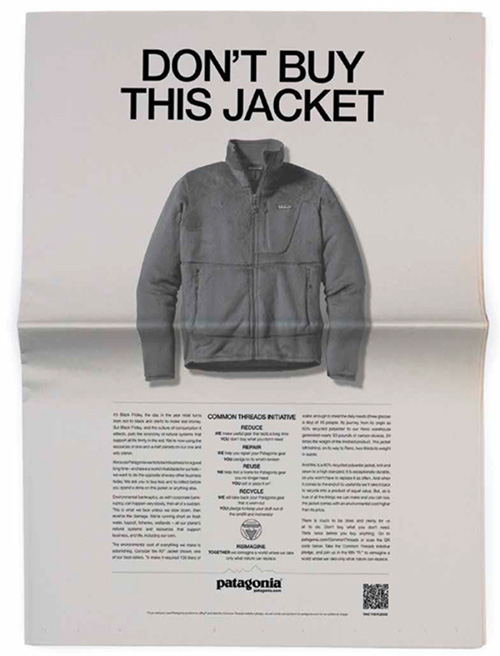 The advert not only shows the jacket which definitely shouldn’t be bought, but also meticulously lists the reasons why you shouldn’t buy it. It explains that the production of the jacket in question required 135 litres of water, equivalent to the daily requirements of 45 people. Its transport to the warehouse created almost ten kilos of CO2, or 24 times the weight of the jacket itself. Finally, the bottom line states that the jacket produced two thirds of its weight in waste on its way to the clothes peg. All good reasons to repair or recycle clothing instead, or simply wear garments for longer, instead of buying a new jacket.

A risky campaign? Not really. The company projected the values of Patagonia into the shopping malls of Manhattan, releasing a wild bull to gallop over the consumer-filled pavements of Times Square – gaining maximum exposure in the process. The campaign was built on the premise that there is a growing willingness worldwide to pay more for products that attempt to change social and economic processes for the better. Patagonia’s sales revenues tripled between 2008 and 2015, rising to USD 750 million. The products sold better than ever – not despite, but because of such ads.

In its 2016 Black Friday campaign, Patagonia announced that it would donate its entire daily sales revenue to environmental protection groups. Instead of the anticipated two million dollars in sales revenues, the company took ten million – clear evidence that people like spending more if they feel part of a movement. The conscious decision to donate the proceeds to small initiatives also suits the concept down to the ground. The grass roots movement compliments the image of wilderness and nature much better than bureaucratic apparatuses and well-paid officials.

At this year’s World Economic Forum in Davos, Patagonia was awarded the Accenture Strategy Award for Circular Economy Multinational – hard evidence that the company has finally garnered the attention of the pin-striped suits, and that without ever having to put on a suit itself. The award recognised the Worn Wear program, which was introduced in 2013 and embodies the change in paradigm in the 2011 ad from New is Better to Better than New. Patagonia encourages people not only to wear their clothes for as long as possible, but also offers the means to enable this. It operates a central repair service, which mends over 45,000 items of clothing a year, and repair trucks which tour the USA and Europe. The latter give customers the opportunity to hand in their jackets and have any holes and tears sown up. It’s worth noting that this offer applies for all items of clothing, not just Patagonia products. And because true wilderness lovers know what it means to rely on their own abilities, it’s also possible to order free tools online to repair the clothes at home.

Those who not only generate attention for mega-topics like climate change, social responsibility and sustainability, but also benefit from their relevance, also make themselves more vulnerable than others. Patagonia is therefore regularly confronted with criticism, and grievances are voiced which erode at its image as a responsible company. Poor social standards in Asian production plants have been publicised, as has wool that appears to be sourced from companies which hardly deliver on the standards of species-appropriate farming. In 2010, Patagonia was also accused of using down from fattened geese farms in Hungary where the animals were plucked alive.

Patagonia’s reaction to the criticism was telling. Its approach followed the logic of an expedition – thankful to receive new information from other travellers in order to change their path and still succeed. The criticism was published in uncensored form on the company’s website in an effort to highlight which measures it intended to take. The company also clearly expressed that the quest for responsible action is essentially never ending:

Patagonia, according to Chouinard in his book, will never be completely socially responsible. It will never make a totally sustainable, non-damaging product. But it is committed to trying. We simply don’t have any other choice. As the late environmentalist, David Brower, once put it, “There’s no business to be done on a dead planet”.

The Stories We Wear on the company’s website show people tell stories of their favourite garments, like those of a sunhat which has been accompanying its owner, a slightly greying surfer, on his travels for over 30 years. The hat, which has been stitched back together several times, has an emotional value that a new hat would only be able to match after many years of use, if at all. For Patagonia, it’s not clothing that makes people, but people that make something of clothing – something that is more than just a garment. Its value is no longer in its quickly evaporating newness, but in the fact that it only becomes something original, authentic and unmistakable through prolonged use.

It goes without saying that these stories are perfectly staged. In their world there is no fancy catwalk, only the overwhelming natural world; no stunning models, just likeable, perhaps slightly introverted people with rough edges; no hollow words, but stories rich in experience. You can sense the same longing that captivated the hero in Sean Penn’s Into the Wild.

But before you give in to that wanderlust – and who wouldn’t love to drop everything?! – how about a new jacket?